To understand how a detached retina surgery can be performed, we need to understand what retinal detachment is. In a layman’s language, it is a disorder of the eye where the retina gets separated from its attachment to its underlying tissue within the eye.

Retina is a thin layer of light-sensitive tissues on the back wall of the eye. When we look around, light from the objects we are trying to see enters the eye. The light image is focused onto the retina by the cornea and the lens. The retina translates that focused image into neural impulses and sends them to the brain through the optic nerve. The retina can be compared to the film of the camera. 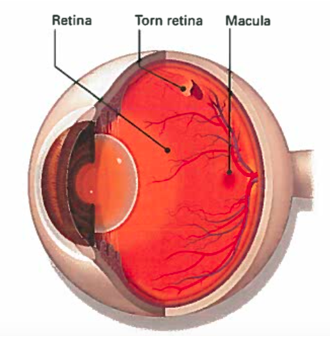 Floaters on the other hand, are caused by condensation in the vitreous gel and are described by patients as spots, strands, or little flies. In case the patient experience a shadow or curtain that affects any part of the vision, this can indicate that a retinal tear has progressed to a detached retina and the patient should immediately consult a doctor without fail.
Retinal surgery is a type of eye surgery involving the repair of a detached retina. The retina transmits signals or messages to the optic nerve and the brain or nervous system, thus completing the cycle of vision. The specific type of surgery will depend on the type, size, and location of the detached retina.

Laser surgery or a freezing treatment called cryopexy may be recommended for small holes and tears. It creates a scar/adhesion around the retinal hole to prevent fluid from entering the hole and accumulating behind the retina and aggravating the retinal detachment. Cryopexy is mostly done in cases where there is a lot of fluid behind the hole.

A scleral buckle is a tiny synthetic band that is attached to the outside of the eyeball to gently push the wall of the eye against the detached retina. The bands are generally not removed. The most common side effect of a scleral operation is the myopic shift.

Vitrectomy involves removal of the vitreous gel and is combined with filling the eye with a gas bubble (SF6 or C3F8 gas). The gas is often injected into the eye to replace the vitreous and reattach the retina (known as a pneumopexy); the gas pushes the retina back against the wall of the eye.